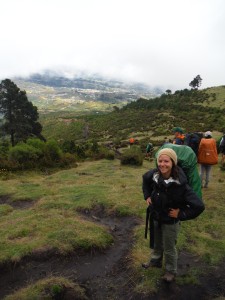 Last weekend, I made a spontaneous decision to climb Volcan Tajumulco – the highest mountain in Central America, at 4220 meters (13,845 feet!). I’ve done a bunch of volcano hikes before but never in freezing cold rain, carrying a fifty pound pack of gear, and camping overnight at 4000 meters. What an adventure!

It started Friday afternoon, with a pre-trek meeting in Xela with our guide company, Quetzaltrekkers. They distributed gear – big backpacks, sleeping pads and bags, tents and tarps, warm pants and jackets, giant bottles of water – and went over logistics and what to expect. The actual trip started at 5am, boarding a camioneta with all of our gear for a three hour ride to the department of San Marcos, where the volcano is located, finally strapping on our packs around 10:30 after an energizing breakfast of (you guessed it), rice, beans, eggs, and tortillas, at a comedor. 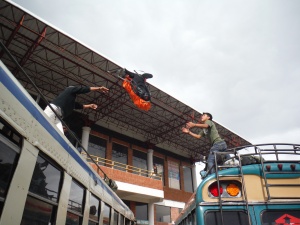 The trek up was steep and challenging, but less so than I had anticipated – the real challenge was managing such heavy bags and adjusting to the rapidly decreasing oxygen levels as we ascended, making it harder and harder to catch our breath and exhausting us way faster than we ever would have imagined. Constant cold drizzle didn’t help the situation, and unfortunately blocked any and all views – but we made it to base camp, most of the way up the mountain and pitched our tents by 3pm. Then it started getting COLD – we’re talking 30 degrees or less, with a nice layer of thick fog and occasional drizzle covering the air. Piling on layers of fleeces, puffy jackets, and warm socks helped a bit, but most of the afternoon – with the exception of some hot chocolate breaks – was spent huddling in our tents for warmth. We all passed out by 7:30, cold and exhausted but excited for the day ahead – the original plan was to wake up at 4 to make it to the summit by sunrise. But hey, this is Guatemala – so of course, there’s always a plan b! Because of persistent rain in the morning, which would have blocked the sunrise, we slept in a bit and headed up to the summit a bit later, around 7:30. 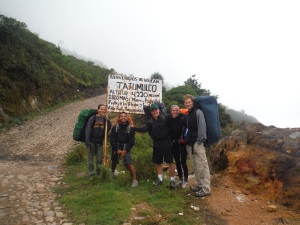 The lake crew on our way up!

Summiting – that’s when things got really crazy. The 200m hike took us around 45 minutes, not because of steepness or physical challenge but simply because of the lack of oxygen. It hit me pretty hard immediately – I had to stop every 10 steps or so to force myself to relax and take a few of the deepest breaths I could manage. But we all made it, and even though we could see nothing – literally nothing, with the exception of the fog and wind and a white sheet of clouds – it felt pretty incredible to be standing there, at the highest point of Central America, looking out over vast nothingness. 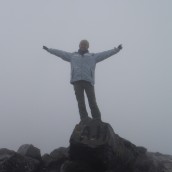 The Roof of Central America 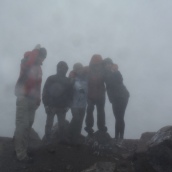 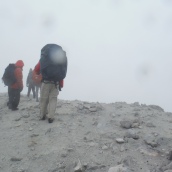 The summit – aka the moon

The hike down was peaceful and relaxing, much shorter and less strenuous than the hike up, and the sun even came out for the last hour or so, letting us see some of the beautiful views we had been missing. Another three hour trip back to Xela, followed by the best hot shower of my life, followed by a final three hour trip back to Pana in the morning, and that was that! My shoulders ache a bit from the heavy pack but other than that, I’m feeling pretty great. There’s nothing quite like taking some time to really disconnect, and no better way than using that time to re-connect with nature – where your only goal for the day is to get from point A from point B (and of course, try not to freeze to death). A lot easier to manage than the hectic scrawlings of my daily and weekly to-do lists for work, which often seem to have a life of their own as they just keep on growing… 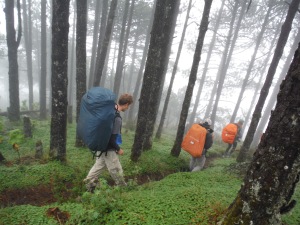 Trekking down through the fog

Obviously, things could have worked out better, but despite the poor weather, it was such a worthwhile adventure and I’m excited to tackle some of Guatemala’s other famous volcanos – Santa Maria, Atitlán, and Santaguito – as soon as possible. But those can wait until rainy season is over…